Swimming Along (Most Of) The Northern Beaches

The Northern Beaches are on the section of Sydney's coast that stretches from the entrance to Port Jackson (Sydney Harbour) to the entrance to Broken Bay. Many of the beaches are famous for their surf and surfers, but today the waves were rather small and gentle.

It has been one year exactly since I set out to swim the Sydney coastline via the ocean pools and tidal baths. I decided to celebrate the anniversary by swimming some of the pools I previously said I was going to leave until next summer. It was a sunny, warm Autumn day, and the sea temperature was still 23 degrees, so I reckonned I'd be able to swim several without getting cold.

Although I have swum from several of the beaches along this part of the coast, I have never swum in any of the rock pools. 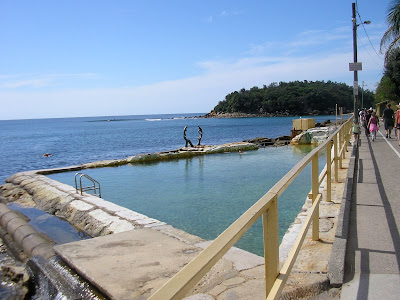 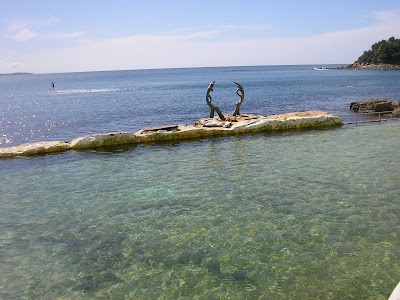 I started the day back in Manly, but this time on the ocean side rather than the harbour side. The first pool I swam was this small but pretty rock pool in Cabbage Tree Bay. It's famous for the sculpture of sea nymphs, 'The Oceanides', by Helen Leete.
The sea was absolutely wonderful: clean, clear, warm and salty.
Queenscliff Pool 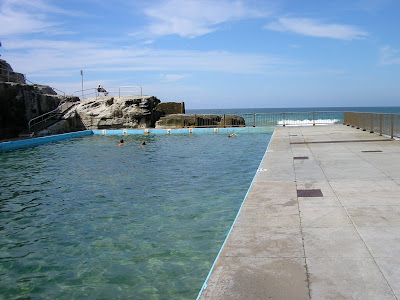 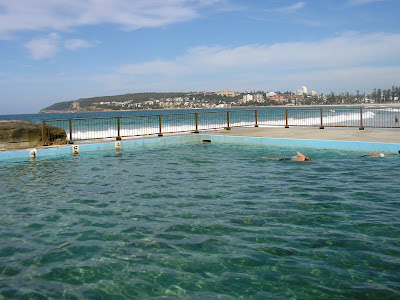 I was interested to find that this seawater pool is a 50 metre marked lap pool cut into the rock platform and formed with concrete sides and floor. I swam several lengths of front crawl, really enjoying myself.
Freshwater Pool 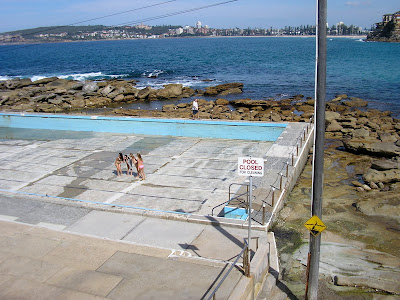 Again, this is a concrete 50 metre seawater lap pool (eight lanes, no less).  Unfortunately, it was closed, emptied for cleaning. Which means that I will need to return at some date to swim the pool.
Curl Curl Pool 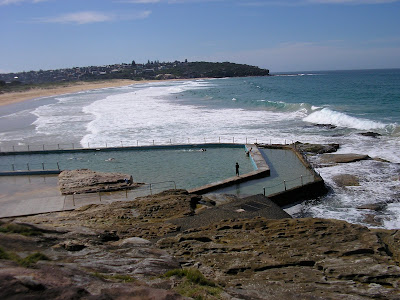 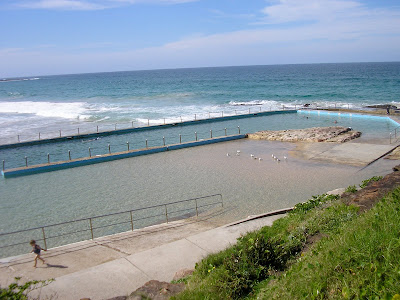 Curl Curl Pool is unusual in that it has a pool within a pool (plus a kids' paddling pool). Apparently, a second pool was built just outside the original rock pool. Then this pool was shortened to 50 metres, leaving a redundant basin beyond the main swimming pool.
North Curl Curl Rock Pool 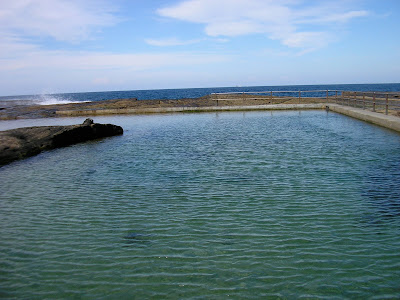 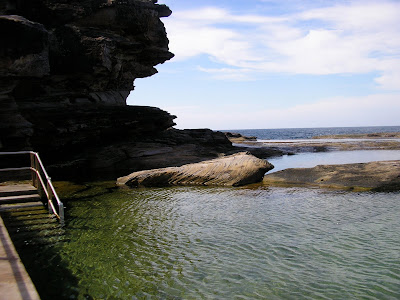 It's a bit of a walk from the north end of Curl Curl Beach to reach this rock pool. You either hike over the headland and descend by steps to the pool, or, at low tide, you can walk around the rocks.  The baths are cut into a large rock platform, and the rocks themselves define one side of the pool.
Dee Why Rock Pool 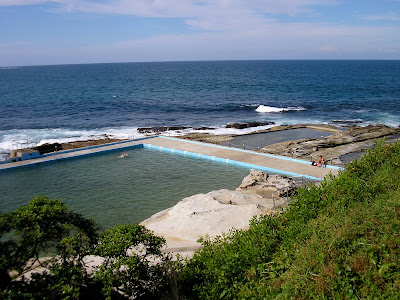 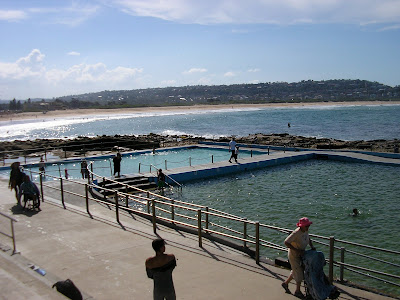 This is another concrete 50 metre seawater pool. It has a small paddling pool at one end. The water was so lovely that I found it impossible to limit myself to one length, even though I knew I was running out of time to complete this leg.
Collaroy Rock Pool 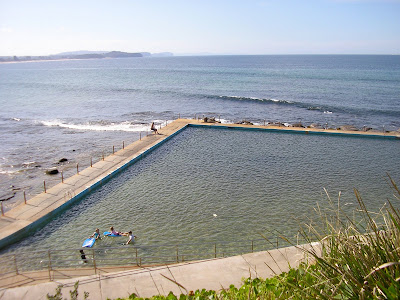 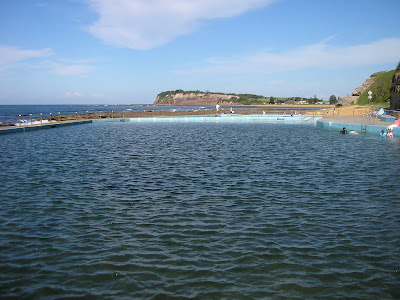 Another 50 metre lap pool with a small paddling pool, but Collaroy has a slightly irregular shape where it follows the sandstone cliff line. Again, I couldn't just swim one lap. It was just too good. I was probably getting quite a bit of exercise as these northern rock pools are mostly larger than the southern pools that I'm used to.
North Narrabeen Rock Pool 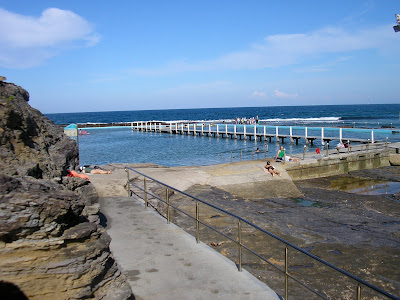 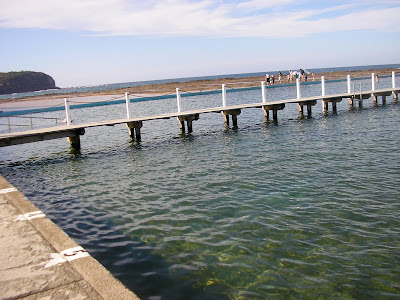 This is a huge ocean baths. I'm pretty sure that it's the largest of the ocean pools (rather than harbour or river inlet tidal enclosures) that I have swum in. The old boardwalk forms one side of a 50 metre lap pool that itself is within a much larger outer rock pool. There's even a big paddling pool.
Mona Vale Rock Pool 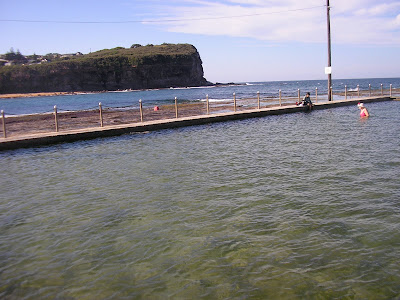 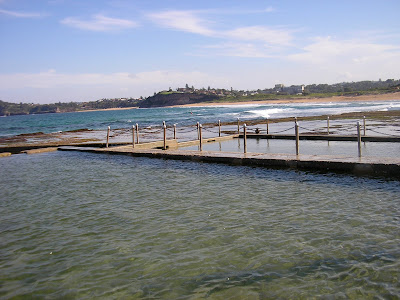 This is a smaller rock pool which is cut into a rock shelf emerging from the beach itself, rather than at the base of a headland or cliffs as is usually the case. The sun was starting to get low in the west as I swam here (daylight saving is finished), and I decided that I would only swim one more pool today.
Newport Rock Pool 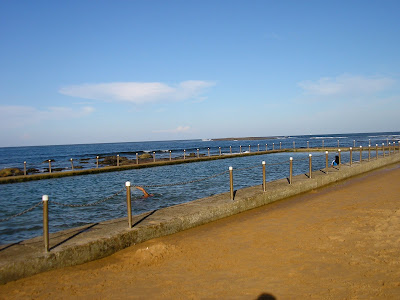 This is the rock pool where Max Dupain took the photograph of young men swimming and sunbathing in the early 1950s ('At Newport') that became the iconic image of Australian beach culture. There's a reproduction of the image at:
http://artsearch.nga.gov.au/Detail.cfm?IRN=115709&PICTAUS=TRUE

It was starting to get late by the time I'd swum the Newport rock pool, and I had a long way to go back to Marrickville. I still had four rock pools on the Northern Beaches left to swim, and also four tidal baths in Pittwater (an arm of Broken Bay at the mouth of the Hawkesbury River). This should be an easy swim next time as the peninsula between the Pacific Ocean and Pittwater is quite narrow from this point north, making all these pools close together. That day, however, really will have to be next summer or autumn.
Posted by Chris at 12:37 PM