The Tidal Baths At Kyeemagh

One week short of four years ago today, I set off on a jolly jaunt to swim each of the tidal baths and rock pools along Sydney's coastline. The idea was to swim from Port Hacking in the south to Broken Bay in the north using the ocean baths somewhat in the manner of The Swimmer by John Cheever. As it happened, there were one or two of the pools that were closed, either temporarily or permanently, when I turned up to swim. I have since been trying to return to these to complete as much of the swim as I can. 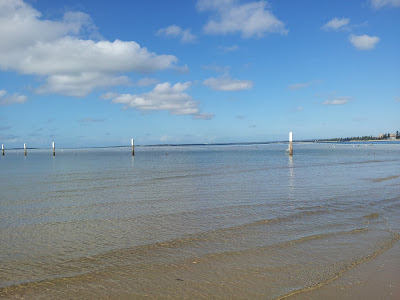 In April 2009, the swimming enclosure at Kyeemagh on Botany Bay had been removed to allow for work on the pipeline under the bay from the desalination plant at Kurnell to inner Sydney.  The plant and pipeline were completed a couple of years ago, and the water board has since restored Kyeemagh baths. Today was the first chance that I've had to swim this section. 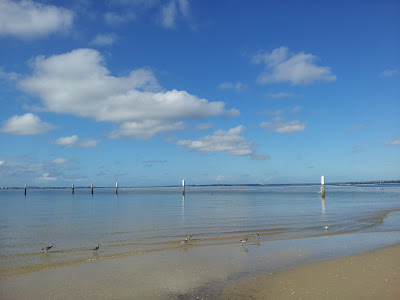 It was quite a warm day by the time I arrived here. The showers that had been forecast had stayed away. The shoreline was crowded with gulls and wading birds, and several large cormorants were sitting along the enclosure nets. The water is still very warm (about 24ºC), so it was a very pleasant, lazy swim. 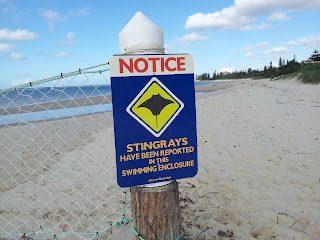 Before I went in the sea, I noticed the warning sign above. Many of the tidal baths and rock pools have had various warning notices put up in the last fifteen years or so. Warnings include things such as uneven depths, stingers, blue ringed octopus and the folly of diving into shallow water.