Petersham Pool In The Rain

For the first time in many years, I didn’t swim on Christmas Day or Boxing Bay. I had badly cut my foot on oyster shells a few days earlier and it was still very painful. Then on Christmas Day it started to rain heavily. Even though my foot was healing, it wasn't a good idea to swim at the beaches or in the harbour because of possible stormwater pollution leading to infection. 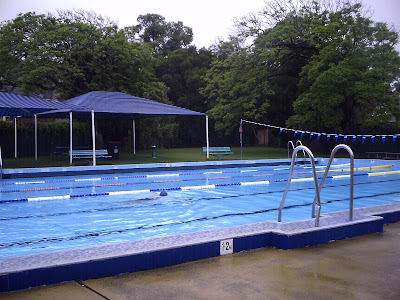 So, off to one of the local Marrickville pools. This is Petersham Pool in Petersham Park.
When I arrived, in the pouring rain, there was only one other swimmer. Although it was raining, it was still very warm, and it felt great to be back in the water (chlorinated or not). 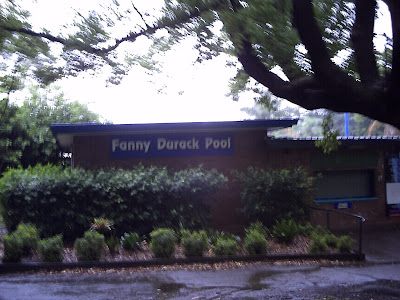 Petersham Pool is also (officially) known as the Fanny Durack Aquatic Centre after a champion swimmer from the early years of the 20th century who lived in the area. It's reported that she was the most accomplished (woman) swimmer in the world from 1910 to 1918, holding all the women's swimming records from 100 yards to the mile. She was also the first Australian woman to win an Olympic swimming gold medal.
Marrickville's other pool at Enmore Park is also named after a champion swimmer from the local area. It's the Annette Kellerman Aquatic Centre. In 1902 Annette held all the women's swimming records in the world. She went to Europe to give swimming demonstrations: swimming 42 kilometres down the Thames in 5 hours; racing 17 male swimmers down the Seine (finishing 3rd); and becoming the first woman to attempt to swim the English Channel. Annette pioneered synchronised swimming, and promoted women's rights to wear unrestrictive swimwear (being arrested for indecency in Boston for wearing a one piece swimsuit). She later had a successful career in Hollywood. 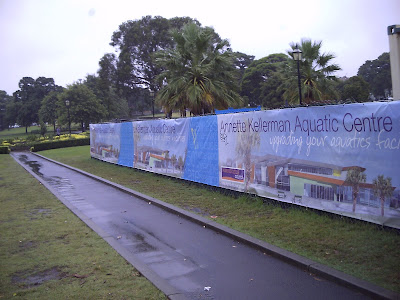 The pool is closed for rebuilding at the moment. Originally an indoor 33 metre pool, it will now (controversially) be extended to 50 metres. I remember that, on summer days, two sides of the enclosed pool could be opened, allowing the breeze to pass through. I hope that this facility will be retained in the new pool building.
Sources:
http://www.marrickville.nsw.gov.au/community/history/fannydurack.htm
http://www.marrickville.nsw.gov.au/community/history/annettekellerman.htm
Posted by Chris at 8:29 PM