I don't think that this swimming enclosure existed in April 2009 when I began this swimming endeavour. I could be wrong about that, but the plan of management for Cockatoo Island only came out in 2010. I found out about the enclosure a year or so ago, and have been meaning to swim it ever since. I picked a bad day to take the ferry over to the island as Sydney Harbour (and Sydney itself) were shrouded in smoke from hazard reduction burning in the eucalypt forests of the Blue Mountains. Visibility was very poor indeed. Not a great time of day to swim either as it was low tide. High tide will be a better idea in this enclosure as we will see. 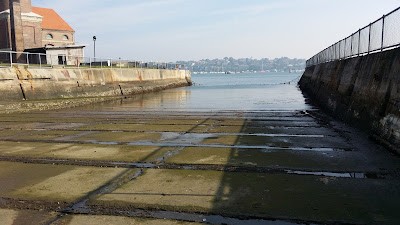 Cockatoo Island is listed as a World-Heritage Site for its importance as an example of extensive convict transportation, incarceration and labour. Its national heritage also includes 137 years of shipbuilding and related maritime history. The docks and works shut down in 1991, and since then the island has become a venue for festivals and events, including the Sydney Biennale which was on when I was there. It is also a venue for tourism, with bars, restaurants, heritage building accommodation and camping. Part of the attraction of visiting the island is that there are so many old industrial buildings, cranes, gantries, docks and slipways remaining. 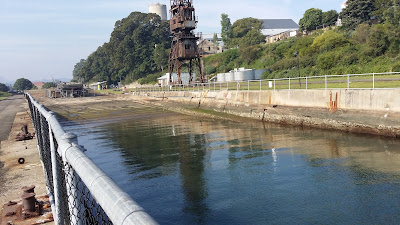 The swimming enclosure is in one of the old slipways, and it has been made by netting off the entrance. Presumably this is to avoid any encounters with the Bull Sharks which are known to inhabit this part of the Parramatta River. 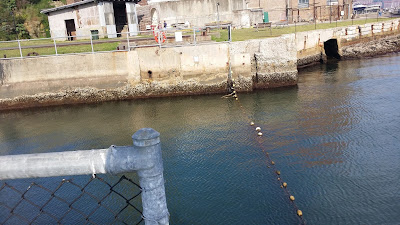 I actually enjoyed swimming back and forth across the enclosure. Not so much for the swimming itself, but it was a very different type of swim looking at the old industrial landscape from the water. 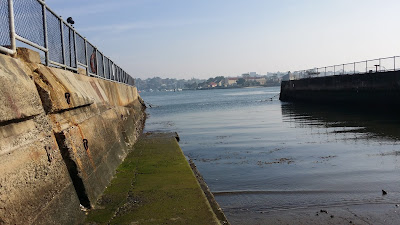 Another thing I liked was, that in these days of councils fearing litigation for injuries and closing many of the old tidal baths, here is a new swimming enclosure. Not only that, but it is an area where there are a minimum of warning signs (often a blight on an attractive rock pool). There's just a couple of unobtrusive No Diving signs and a small sign (that I completely missed at first) advising that you Swim At Own Risk. That particular sign also warns about wearing footwear at all times. That's probably not a bad idea as there are rough surfaces under the water (including a section or two of protruding metal pipe), and there seem to be oyster shells too. Another thing to be wary of at low tide is how slippery the exposed concrete surfaces can become. I think high tide would be a much better swim. 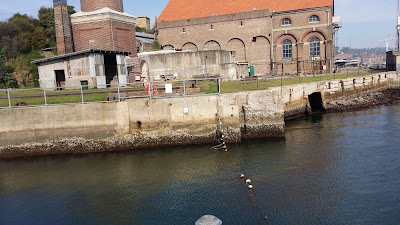 For the past seven summers, I have been swimming in Balmain at Dawn Fraser Baths most weekends. After my swim I spend time relaxing on the decking gazing across the waters of the Parramatta River to Cockatoo Island. Today, after my swim, I spent a bit of time gazing across those waters to the