(Probably) Only Four More Pools To Swim On The Trek

Actually it should really be three pools left, but I completely missed one today. Now I will need to go back to swim the missing pool. I say probably because I am using an urban street directory to locate the pools. It could be possible that there are estuarine baths that are not indicated on the map. I'll need to do a bit more research.

Anyway, I had some free time today, so I set off to swim a little further on my intermittent navigation of the Sydney coastline.

There has been an upwelling in the New South Wales coastal waters these last couple of weeks, and sea temperatures have dropped considerably. Mid - November, the water temperature was 19 degrees Celsius, but, by late November, it was down to 17 degrees. Yesterday, the Wylies Baths website reported the temperature as 15.5 degrees. That's pretty much what it felt like today.

Back to the Northern Beaches 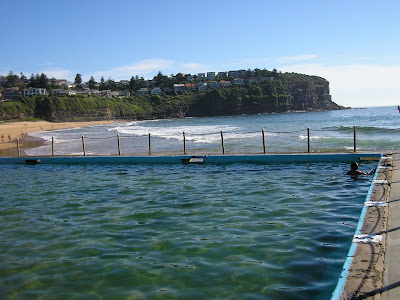 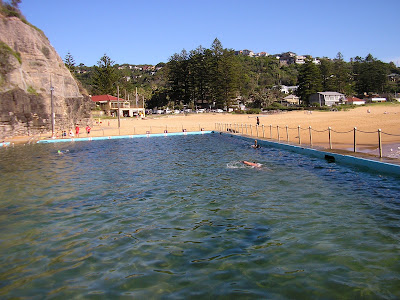 I arrived at Bilgola Beach at about seven in the morning as the kids' swim school was in full swing. Neither of my photos show how one full length of the pool at the shallow side is separated by chains from the main pool. This is the kids' section, and there were plenty of them with their red-shirted instructors this morning. They must be a hardy lot on the Northern Beaches. The seawater was very cold indeed, but none of the kids seemed to be bothered. 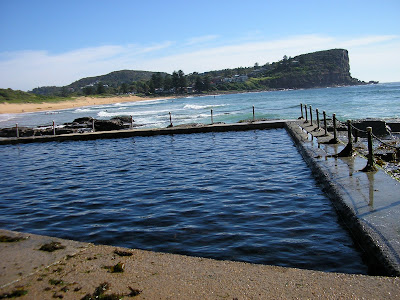 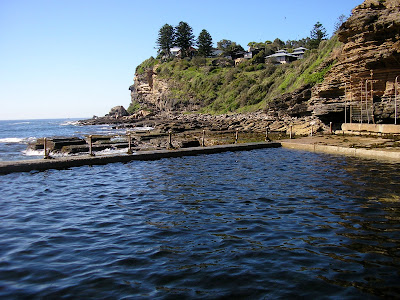 This is a smaller rock pool than many along the Northern Beaches. It must get a lot of waves crashing into the pool at high tide or when the surf's up, as it was full of dumped seaweeds today. A lot of seaweed had already been fished out of the baths, and had been left on the concrete decks in the sun where it lent its own particular aroma to the occasion. If you look closely at the second photo, you may spot a high wire fence at the landward side of the pool. Many of the pools along the Northern Beaches have these to protect swimmers from rocks falling from the unstable cliff faces. 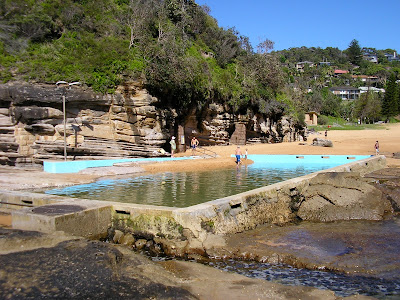 A shallow rock pool. I'm not sure that it is still being used for swimming these days. The sign actually said it was closed, but there were families using it. I thought I'd just have a paddle in the correct direction, as it was only half full, but, in the end, there was enough water for me to carefully swim a length of breaststroke. 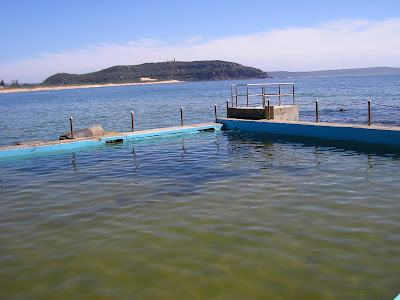 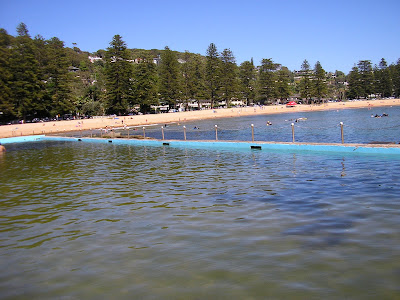 There are some amazing coastal views along this section of the Northern Beaches. It was a clear, sunny day with bright blue skies, and it was easy to look over to Barrenjoey Head and the coast beyond Broken Bay. At this point the Warringah Penisula is a narrow neck of land, so you also get views of Pittwater and Broken Bay itself.

The day had become very hot, and I was no longer worried about the cold water. I had a great swim at Palm Beach (probably most famous these days as the location of TV's Home and Away).


Pittwater is a large body of estuarine water extending south from Broken Bay and the Hawkesbury River, it is parallel to the coastline. 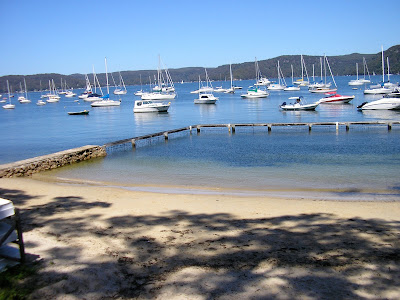 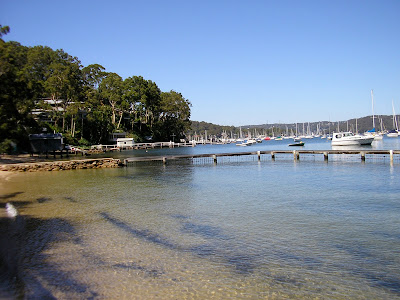 These tidal baths are on the other side of the peninsula from the Avalon Rock Pool. It's calm water swimming here, and it gets very deep on the far side of the enclosure. The water was quite a lot warmer here.


Oh dear, the one I completely missed. I didn't even realise until I came home and looked at the map. I'll return to swim here on the final day of the swim. 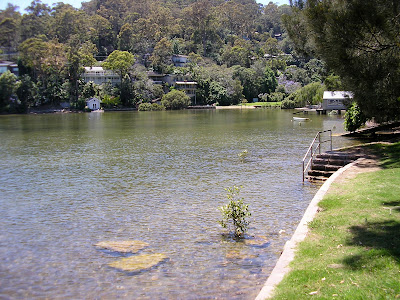 The tidal baths at this location are no longer used. Apparently the enclosure used to be 30m x 20m. It looks like the council have removed any remains of a swimming enclosure. All that's left are the stone steps and a short section of stone wall. There are even signs saying that swimming is not permitted, so I had a paddle in the shallows. 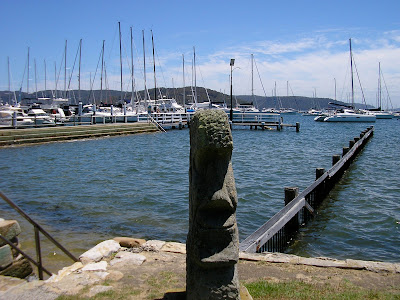 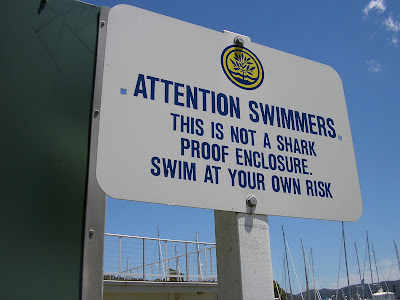 I have no idea why there is a replica in miniature of an Easter Island statue at this tidal baths, nor do I know why about 4 metres of the baths are unenclosed, but there's a friendly reminder from Pittwater Council to the effect that having unenclosed sections of pools is not without drawbacks.


I went to check out the ferry for Scotland Island (a largish, inhabited island in the middle of Pittwater), hoping to swim their tidal baths. Unfortunately, I'd just missed one by a few minutes (it was leaving as I got there), and the next one was an hour away. As I would have had to walk around to the opposite shore of the island to swim, then walk back to catch a ferry, I decided to give it a miss today. I will return to swim here, then swim an enclosure in Kur-ring-gai Chase National Park, then the last Sydney baths up on the Hawkesbury River, before I backtrack to the one I missed (I should also return to Freshwater Pool which was being cleaned when I was there).

One more day should probably see me finish this rather silly lark.
Posted by Chris at 5:30 PM